A talking duck as a guide for the Roskilde Festival 2019 program. 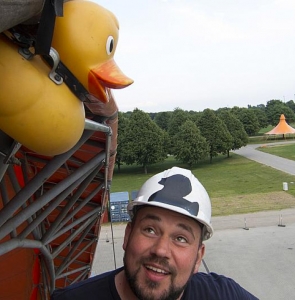 The story actually begins with a fish.

Back in the day, the teams setting up the different stages had a fish mascot that they kept stealing from each other to use as their stage mascot.

The guy in charge of building up the Orange Stage canopy is called Anders, and he’s known as “anden“, which translates to “the duck”.

When he was put in charge, he brought his own personal mascot, the duck, and stuck it right there, top middle, of Orange Stage.

It now gets a little nerdier: The duck was once stolen by the team from the Arena stage, who painted it green because that stage was once called Green stage.

They had to pay for that mistake of course, with lots of beer, and after a while the Orange crew managed to remove most of the green paint, but if you look closely you can still see green remnants on the otherwise yellow duck.

The duck at the festival